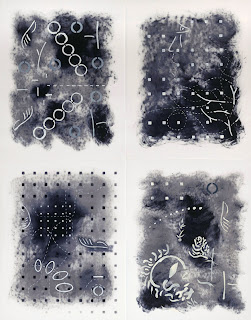 DOE Projekts was founded in 2010 by Deborah Adams Doering.

Doering's vision for DOE Projekts includes inviting artists, artist groups, and other professionals, to collaborate on large scale installations and performative works that use the movement of the zero (the circle) as a point of departure.

"DOE" is a surname that is often used by English-speaking people as a placeholder. It denotes "everyperson," which indicates individuality as well as invites an open community collaborative effort. Participants in DOE Projekts are listed by name. Groups collaborating with DOE Projekts are also given full credit.

In 2010, DOE Projekts worked in collaboration with KAP, South Africa. Two tapestry works and a series of prints were completed.

In 2012, DOE Projekts and KAP will collaborate in the art action/installation "just us at work" at the Amtsgericht, Kassel, Germany, June 1 - Sept 10, 2012. (See additional blog posts).

In 2011, DOE Projekts collaborated on the event "Blue Plate Special," highlighting local food production, with the Mobile Food Collective, participants in the 2010 Venice Biennale, Architecture. "Blue Plate Special" was part of Doering's installation "Eye Eat Too" at the Illinois Institute of Technology, Chicago.

DOE Projects is a sponsored project of FracturedAtlas.org. More Information »
Posted by DOEprojekts at 3:51 PM