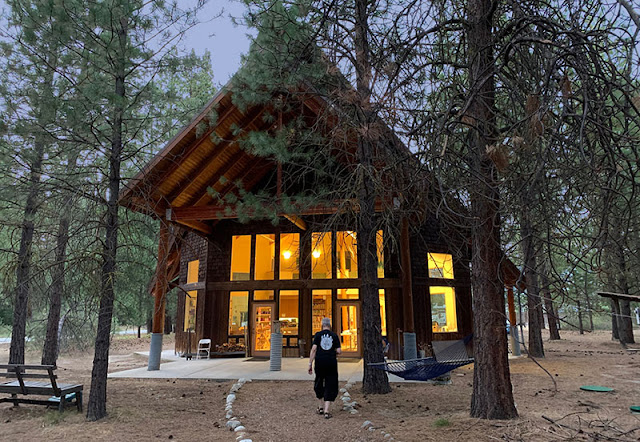 We, Glenn and Deborah Doering, DOEprojekts, were very pleased to be invited to teach at the Grünewald Guild, near Leavenworth, WA. The Guild's Fiber Arts Studio (pictured above) is where we lived with other Guild faculty during our Summer 2021 Sessions. We have been teaching classes at the Guild for over 20 years, sometimes as a team and other times individually. Summer 2021 allowed each of us to teach our individual interests to eager participants. 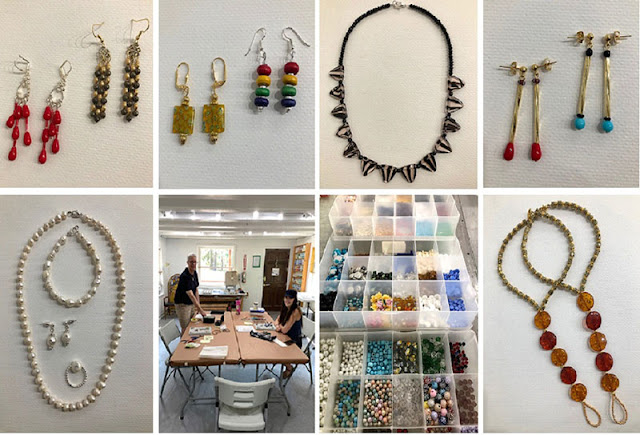 Glenn taught "Fashion Jewelry: Redesign, Repair, or Replace." Participants learned how to design pieces of jewelry, how to repair broken jewelry, and how to redesign older pieces of jewelry into something new and more interesting. Although the in-person class was small, the design output was large, as seen by the photos above. 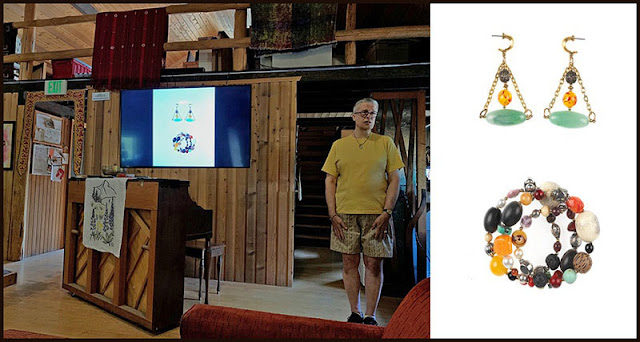 Glenn presented his jewelry design portfolio from the past 20 years to the Guild community. Attendees and Guild staff were especially delighted to see his unique custom commissions for individual clients. 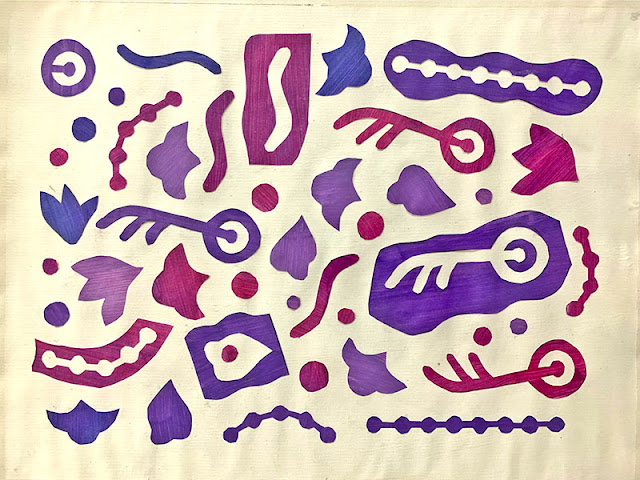 Deborah's Guild class was titled "Matisse and More." Participants were introduced to Henri Matisse (1869-1954, France) who created large "Cut-Outs" in the last decade of his life.
Deborah's interest in Matisse stems from her own stencil-cutting and printmaking (also known as "Pochoir" printmaking) and how basic shapes and a variety of colors can be applied to DOEprojekts' Coreforms. The collage above is one that Deborah created using Coreforms and Matisse's "cut-out" process. 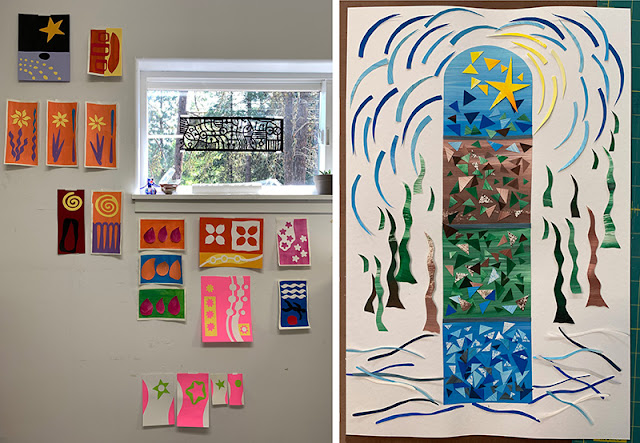 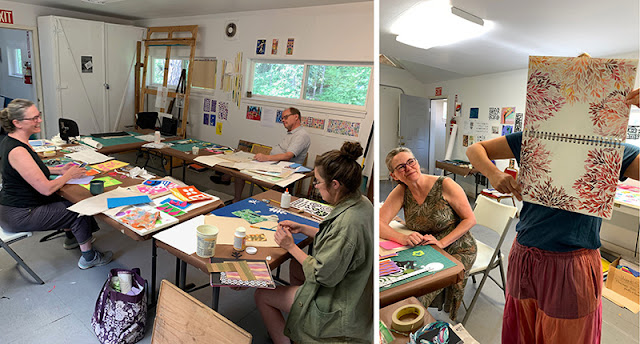 Participants created many outstanding "cut out" collages during this one-week Guild class, cutting out forms from their hand-painted papers, just as Matisse and his assistants did almost 80 years ago. It was very rewarding for Deborah to work along side such dedicated and talented "students" -- we had a great week together and inspired each other with our work! 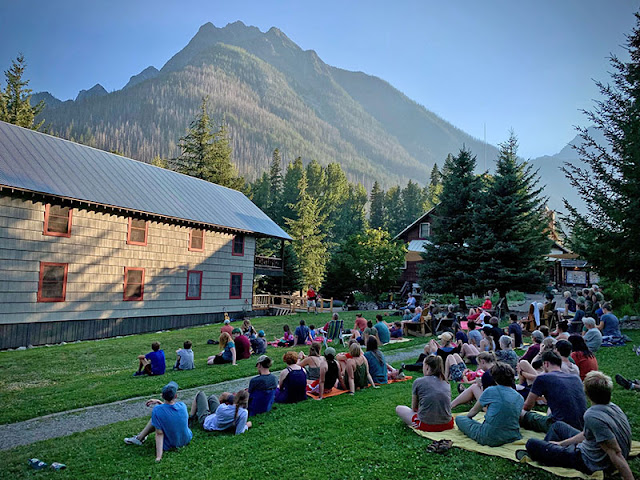 Holden Village was formerly a remote copper-mining village. It was transformed into an educational retreat center by the Lutheran Church (ELCA), with the help of the US Department of Agriculture and Forest Service, in the early 1960s. Deborah and Glenn have "team taught" workshops at Holden since 2017.

This summer's workshop was titled "Mandalas, Manifestos, Ciphers, Circles." Participants were introduced to a brief history of mandalas -- the word "mandala" is Sanskrit for "circle." They were also shown examples from DOEprojekts' 100 Mandalas for a Time of Quarantine (see Instagram/DOEprojekts).  DOEprojekts' mandalas include manifesto phrases such as "Seek Justice," "Love One Another," "Watch Beauty," and "Black Lives Matter." Other mandalas include ciphers (code-like symbols), and some have been created using a variety of circular forms/Coreforms. 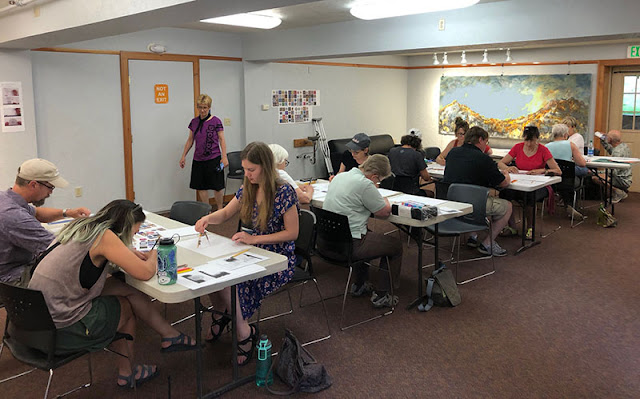 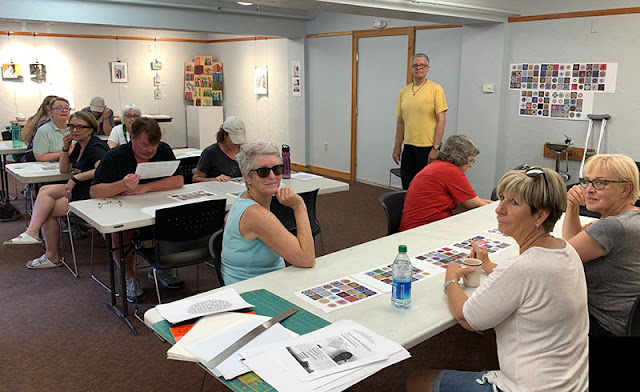 Holden Village has an "Art Gallery" that doubles as an art studio -- it is one of the "coolest" places in the Village, a fact that was extra special this year, as temperatures rose to almost 100 degrees Fahrenheit on many days! Even so, some "mandala-makers" chose to sit outside the Gallery-Studio to work on their images.

We appreciated that many "Villagers" came each day for 2 hours or more to work on their mandalas. Below is a small sampling of some of the mandalas that were made during our one-week workshop. 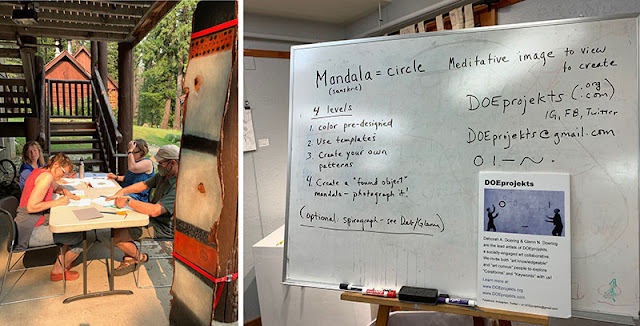 Glenn and Deborah are now back in New York City, preparing for their work as art teachers and administrators at The Beekman School. They are also preparing to open a solo exhibition, titled "Seeds in the City: Celebrating Growth Potential" at Metro Baptist Church, 410 W. 40th Street, NYC, 10018. DOEprojekts received a grant from the New York City Artists Corps that will fund the "Seeds in the City" installation of our new works.

The exhibition/installation opens on Saturday, Sept 18th and runs until Sunday, October 23, 2021. Watch for another blog post with more details in the near future!

As always, we thank you for your support and keeping in touch with us -- we enjoy hearing from you, and finding out what is happening in your life and work. Please follow us and "Like Us" on social media:

Posted by DOEprojekts at 9:27 PM